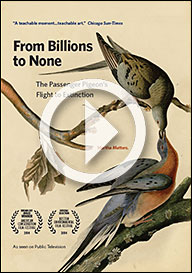 Join us 7:00pm at the Danville Public Library for a viewing of From Billions to None: The Passenger Pigeon’s Flight to Extinction.

A new documentary, From Billions to None tells the incredible, forgotten story of the extinction of the passenger pigeon 100 years ago, and highlights pressing conservation issues today. “The amazing story of how we eliminated this once abundant bird, coinciding with a centennial anniversary of its extinction, provides a “teachable moment” that can raise awareness about species at risk and living more sustainable today,” says author and co-producer Joel Greenberg.

A key animated sequence recreates a passenger pigeon flock estimated to be at least one billion birds by a then unknown John James Audubon. In 1813, while traveling in Kentucky, Audubon wrote, “The air was literally filled with pigeons. The light of the noonday was obscured as by an eclipse. The pigeons passed in undiminished number, and continued to do so for three days.”